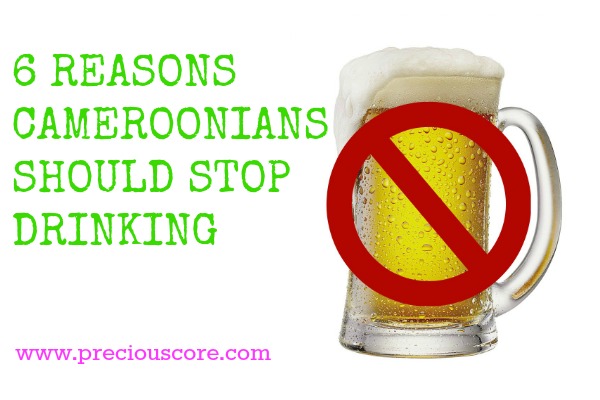 For many years, I have watched my "contri pipo" drink their destinies away and this is sad. They even have love names for alcohol such as, "shark" and "one man". If they only ended at "one man" (one bottle of beer), it would have been better. Unfortunately, one man quickly becomes six men, messed-with-urine pants (ewww!), a nap in the gutters and having to soothe disgruntled partners.

Cameroon is one the highest alcohol-consuming countries in the world! This is confirmed by a Global Status Report by the World Health Organisation. When Cameroonians are happy, they drink. When they are sad, they drink. When they eat, they drink! And no matter how much the price of a bottle goes up, their love for alcohol never goes down.
A lot of problems in Cameroon are tied to the bottle. Here are six reasons why Cameroonians should stop drinking:

1. Drinking drains you of valuable money

Some people can hardly go a day without a bottle of beer, or two, or even four! A bottle of beer costs at least $1. That money adds up quickly. Add it up and you must have paid at least a year's school fees for a needy child or even began a business for yourself.
2. Drinking breeds evil company
The company a lot of people keep while drinking is far from being good company and evil company corrupts good manners.
3. Drinking blocks your reasoning
That's why Cameroonians merely bluff and hardly stand up and fight. Those bottles of beer have a way of drowning rationality and positive action.
4. Drinking can lead to permanent brain damage

Google is your friend, my friend.

When a spouse spends a significant part of their life drinking, they hardly have time to invest in their relationship.

6. Drinking has adverse effects on health

Apart from brain damage mentioned above, other parts of the body affected by drinking, include,

-The liver
-The heart
-The kidney

Bonus point: Drinking gives you bad breath. Have you ever tried to strike a conversation with someone who just gulped down some beer? Mouth odour on fleek!

No wonder, my university lecturer, Diffang always referred to the primary brewery company in Cameroon as, "Brasseries di do Cameroon". Ha.

« HERE'S WHAT'S UP: COOKING AND MORE COOKING!
HOW TO MAKE DELICIOUS CORNCHAFF »