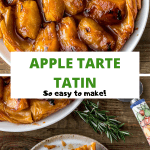 Caramelized Apples atop flaky pastry oozing with bubbly caramel deliciousness. Tarte Tatin is like an upside-down apple pie. This French dessert is the recipe to make to impress. It is ready in under one hour!

This post is sponsored by the French Ministry of Agriculture. #FranceBonAppetit

Tarte Tartin, where have you been all my life?? I fell in love with Tarte Tatin after watching an episode of Master Chef in which the contestants were asked to make Tarte Tatin.

I was intrigued by the big pieces of fruit, the caramel and how elegant it looked. However, the chefs on Master Chef made it sound like it was so difficult to make. Maybe it was a tactic to scare the contestants?

The truth is Tarte Tatin is one of the easiest desserts you will ever make. It requires only 5 ingredients, it is ready in under one hour and it is very forgiving!

This recipe goes straight into my list of desserts to make over and over again. And I am sharing it on the blog because sharing is caring.

I have been loving the French groceries I have found at Trader Joe's lately. Lots of authentic French cheeses, French butter, REAL French macarons, French cookies, and French sodas.

I also found some authentic French butter at Kroger (Foods for Less here in California). The flavor of French butter is exceptional. With some Fench butter, I had to make Tarte Tatin, which is a classic French dessert.

Don't be intimidated by how Tarte Tartin looks. It is one of the easiest things you will ever make yet it looks so fancy!

What is Tarte Tatin?

Tarte Tatin is a classic French dessert that is like an upside-down apple pie. Peeled and cored apples are cooked in a caramel sauce.

The apples are topped with puff pastry then baked until the pastry is golden brown. After baking, the tart is turned upside down so the glistening apples are on the top while the flaky pastry lies beneath.

Tarte Tatin tastes sweet with intense caramel flavor, with a slight tang from the apples and a bit of crunch from the edges of the pastry.

After cooking, the apples turn out soft though they still hold their shape. The ooey gooey caramel that coats the apples is to die for!

Tarte Tatin requires only 5 simple ingredients:
1. Butter: I am in love with the imported French butter I have been seeing at grocery stores. They have amazing flavor and made baked goods taste ten times better.

2. Granulated sugar. The sugar together with the butter form the caramel sauce with is the base for Tarte Tatin.

3. Vanilla Extract. Be generous with the vanilla extract for amazing flavor!

4. Apples. My favorite apples to use are Pink Lady or Honeycrisp apples. They are not too tangy and still hold their shape after baking.

5. Puff Pastry. No need to make pastry from scratch here. Just get puff pastry from the grocery store. Puff Pastry, also called pâte feuilletée is a light and flaky pastry made with laminated dough.

You only need one sheet of puff pastry for one Tarte Tatin. I particularly LOVE the puff pastry at Trader Joe's. It is made with fewer ingredients compared to other puff pastries I have tried. Puff Pastry can be found at the frozen section of your grocery store.

How To Make Tarte Tatin

Second, place butter and sugar in a cast-iron skillet.

Set the butter and sugar on medium heat and let them cook while stirring until the butter melts.

Arrange the apple slices over the butter and sugar.

Place the skillet back on the fire on medium heat and let it cook until the sugar and butter turn into caramel. About 10 minutes.

Remove the skillet from heat and sprinkle on a generous amount of vanilla extract.

Sprinkle flour on a work surface then roll out a thawed sheet of puff pastry so the pastry can completely cover the apples.

Place the pastry over the apples and carefully tuck in the edges.

Place the skillet in a 400 degree Fahrenheit oven and bake until golden brown in color. It takes about 15 minutes to bake.

Remove the skillet from the oven and let it rest for 5 minutes.

Carefully flip the Tarte Tatin over a plate to reveal the gorgeous caramelized apples.

Slice and serve. Top with whipped cream or ice cream if you like.

Apart from apples, you could equally make Tarte Tatin with the following fruits:

What to Serve With Tarte Tartin

Tarte Tartin tastes great on it's own but you could take it to the next level by serving with one of the following toppings:

So guys, make some Tarte Tatin. Your tastebuds will thank you. It is elegant for serving guests! Check out your local grocery stores for French groceries produced in France and bring the French experience right into your home.

Caramelized Apples atop flaky pastry oozing with caramel deliciousness. Tarte Tatin is like an upside down apple pie. This French dessert is the recipe to make to impress. It can be made in under one hour!
5 from 1 vote
Print Pin Rate
Course: Dessert
Cuisine: French
Prep Time: 20 minutes
Cook Time: 25 minutes
Total Time: 45 minutes
Servings: 8 servings
Calories: 307kcal
Author: Precious

1. If you do not have a cast iron skillet, try these other ideas: a. You could use another kind of oven safe skillet. With this method, cooking times may vary so watch the skillet closely.  b. Cook the caramelized apples in a regular skillet then transfer to a nine-inch round baking dish. Top with the puff pastry, tuck in the edges and bake. 2. For more flavor, try these ideas: a. Place a cinnamon stick on the apples before adding the puff pastry. b. Split open a vanilla bean and place on the apples before covering with a Puff Pastry. (If you choose to use a vanilla bean, no need to use vanilla extract). c. Place a couple of anise seeds on top of the apples before adding the puff pastry. If you add any of these options, they will release their flavor into the Tarte Tatin as it bakes and make it taste even better. 3. Salted or unsalted butter works well in this recipe. However, if you use unsalted butter, add a pinch of salt to the butter and sugar. A pinch of salt will make caramel taste even better. 4. DO NOT add the vanilla extract while the apples are still on the fire. This might flare up since most vanilla extracts contain alcohol. Add the vanilla AFTER you remove the skillet from the fire.

Thanks to the French Ministry of Agriculture for sponsoring this post!