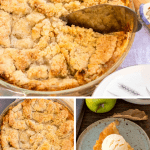 This is the most delicious Homemade Apple Pie I have ever had! It has a buttery crust, insanely flavorful spiced apple filling and is topped with a crunchy sweet streusel. It is a no-fuss recipe and perfect for even the beginner baker!

This post is sponsored by Hidden Shelf Publishing! I am so excited to be partnering with the amazing people at Hidden Shelf Publishing. Their recently published book, a historical fiction titled Send Judah First is a very intriguing story. This apple pie recipe is adapted from the recipes in the back of the book.

​​​​​​​Their recently published book, a historical fiction titled Send Judah First is a very intriguing story. This homemade apple pie recipe is adapted from the recipes in the back of the book.

A Recipe That Tells A Story

I just love recipes that come with stories attached to them! This Homemade Apple Pie recipe is one of such recipes.

The book the recipe is adapted from, Send Judah First is about Yuda (Judah). Judah is a young girl who was stolen from her village in Ivory Coast, Africa by white slavers. She was taken to America where she lived as a slave for several years. Unlike many other slaves who worked in plantations, Judah was a cook.

She was taken to America where she lived as a slave for several years. Unlike many other slaves who worked in plantations, Judah was a cook.

She cooked from the heart. And she made some of the best meals! This Homemade Apple Pie is thought to be one of the recipes, Judah must have made for her "mastah".

A Story That Had to Be Told

The author of Send Judah First, Brian C Johnson visited Belle Grove Plantation in the South several years ago and that was where he first heard the story of Judah, the main character in the book. Judah lived at Belle Grove for over 20 years. She was the head cook and she bore twelve children.

Unfortunately, however, in historical records, Judah is only mentioned twice. When Brian heard Judah's story, he felt moved and haunted by it. So he went on to tell her story in order to bring to light such an important human.

And I must say Brian did a great job, you guys. I was utterly moved by the story. Reading Send Judah First was like watching a movie to me. Vivid pictures. Moving scenes. And sometimes I suffered heartbreaks with the characters in the book. It was so absorbing.

I could totally picture Judah's life through this book. And it gave me great insight into African American history. I am forever changed, thanks to Send Judah First.

As I flipped through the recipes in the back of the book and made some pie crust and some apple pie, it felt like I was transported back in time.

This is such a rustic looking pie and I love it. I would imagine that in the slavery days, "aint nobody got time to make a lattice pie crust to place on some daggum apple pie!"

You guys, the broken English that is spoken by enslaved Africans in Send Judah First is so interesting to read! I have been thinking in that kind of English since I read the book!

Send Judah first tells an important story about slavery. As an African, I was touched to read the stories of other Africans that were denied the chance to live in their countries.

I LOVE that the main character in the book is a cook and I was absorbed in reading about how she handled the kitchen, the details about the things she cooked and how she survived not as a weakling but as a strong woman.

The Homemade Apple Pie of Your Dreams

This homemade apple pie is:

How To Make Homemade Apple Pie

Making Homemade Apple Pie is as easy as ABC.

I use an all-butter pie crust here although the pie crust recipe in the book calls for lard. Lard is not easy to come by that's why I didn't use it. I wanted to share with you a pie crust recipe that is approachable.​​​​​​​

The ingredients for the crust are butter, flour, salt, and cold milk. You either mix the ingredients by hand or mix everything in a food processor.

The pie crust here makes enough dough for two pies. You could keep the other half for a second pie, use it to make a top crust if you want to skip the crumbly top OR use all the dough for one super thick crust.

If you choose to make one thick crust with all the dough, increase the baking time so the pie crust cooks properly. The pie crust is done when it is a cool brown color. In this recipe, the pie crust is baked before the filling is added.

Also, this pie crust will fit either an 8-inch pan or a 9-inch pan. I tested the recipes with both pans and they both worked well. Just make sure you roll the crust out enough to completely cover whatever pan you use.

B: Make the filling.

I use a combination of tart and sweet apples here and that ensures that the pie filling is still tart but not overwhelmingly tart. It is a to-die-for pie filling and you do not need to precook it. Talk about easy!

The pie filling is made up of apples, sugar, freshly grated nutmeg, lemon juice, and cornstarch.

Freshly grated nutmeg is key here for optimal flavor but if you can't find whole nutmeg, use ground nutmeg. And don't go easy on the nutmeg either. You need this spice to bless your pie.

Place the filling into the pie crust then top with a simple mixture of flour, butter, and sugar.

The topping looks rough at first and you might be unsure about it but as it bakes the butter melts and it forms this beautifully imperfect pie.

So simple, yet so delicious. This is the homemade apple pie of your dreams!

Apples are in season now so this is the perfect time to make some hearty apple pie and cozy up with a good book! 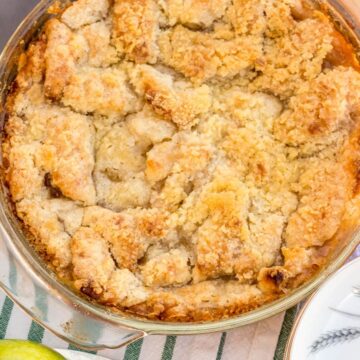 1. Do not skip placing the pie dough into the fridge for 10 minutes before rolling it out. This ensures that the dough doesn't break easily while rolling it out and also, it doesn't shrink easily while baking. 2. You could use just tart apples (like granny smith apples) or a mixture of tart and sweet apples in this recipe like I did. When I tested the recipe, the  pie was too sour with just tart apples. I LOVED the pies with a mix of granny smith and honeycrisp apples. But if you love tart pies, use only granny smith. 3. You could use storebought pie crust in this recipe if that makes it easier for you. 4. Use whole nutmeg instead of storebought ground nutmeg for the best flavor in this recipe. Simple grate the nutmeg with a microplane or small grater. 5. This recipe is adapted from the recipes in the back ofSend Judah First, a book that tells a moving story about an African slave who was a cook for over twenty years.