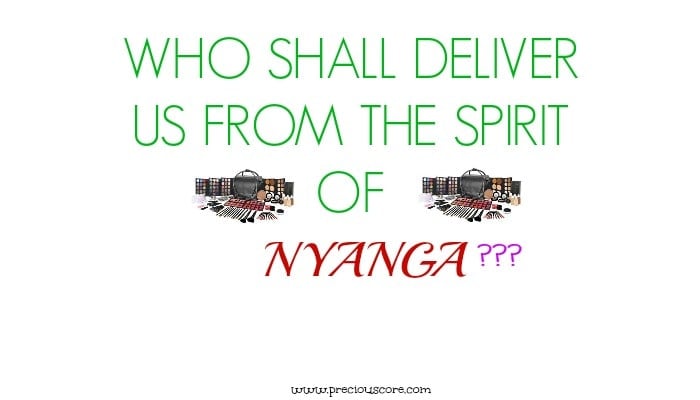 I remember the nyanga things I took cognition of when I just got old enough to see women struggle to improve on their appearance. My aunt had a special corner on the wall of her room. It was the spot where she scribbled a pencil severally. This created an overly dark spot which she used as a multipurpose make-up. With the tip of her finger, she will collect some of this "black dust" and darken her already bushy eyebrows. Then she will put some some of this multipurpose dust on the facial hair on both sides of her face. To top it all, some of the blackness will be put on her eyelids. And if she was feeling bubbly, enough, more of her scribbled pencil cum make-up will go on her lips as a lip liner.
Make-up was very cheap. There were no liquids in bottles and tubes being peddled about as foundations that had the ability to turn a 60 year old woman into a sweet sixteen. There were no colour matches to pick the right foundation. We only heard about foundation in stories. Our mothers sat in the parlour during the 7:30 news on CRTV and commented on how the journalist reading the news only looked pretty because the foundation she was wearing had done a fine job of hiding her wrinkles.
It was in little chit-chats like this that I first heard the name, foundation and I never set eyes on one until many years later. My aunties did not need foundation. They had the chalk. The chalk that nursery school pupils carried with their arm-boards to school was enough foundation for them. All they needed was a corner on the wall and a child around that used the chalk who was willing (or unwilling) to share. They will take a partially used or full chalk and on this special corner, they will write with the chalk repeatedly on one spot to create a powder. This powder was rubbed all over the face to achieve a smooth look.
Those who were on top of their make-up games added colour to the mix. Red was the reigning colour. They will paint their lips red... sometimes the redness only got to a portion of their lips... but that was okay. There was no stopping of glam as long as there was some redness to go. There were no purple matte lipsticks, berry velvet lipsticks or pink satin lipsticks. Lipsticks were red, shiny and oily. Finish.
And when they attended occasions with their red lippies on and drank fresh palmwine, top pamplemousse (a grapefruit-flavoured soda in Cameroon) or whatever was served, a huge part of the redness remained on the drinking glass.
They didn't need lip balms. Vaseline was enough. Vaseline served as a body lotion, a butt rash cream for babies, a hair oil and a lip balm. There was just no need for extra lip balms.
Their hair was strong and curly as their hearts were. And if they were not wearing them in Long Long or Bikidi, (popular hairstyles in the 80s in Cameroon) they combed them into huge Afros that accentuated their less-pricey glam. Those who were a little more buoyant had the straightening comb. After heating the iron comb over a couple of burning firewoods, they used the comb to straighten out their curls.
It wasn't long before the wind of change started to sweep right across the nyanga walls. From pencils scribbled on the wall, they went to pencils specially made to draw new brows. They shaved their bushy ones with razor blades and opted for new ones drawn with the purchased eye pencils, which they affectionately called, "penso eye". With "penso eyes" you could create just any kind of brows you wanted- long, short, winding or anything in between. 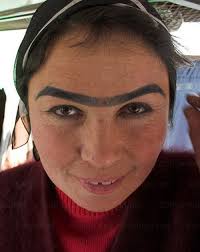 Then from the chalk, they went to little bottles of perfumed talc  called "powda" which they rubbed on their faces to make them smooth and sometimes, ghost-like. Before long, "powda" in the bottle gave way to "brown powda". The foundation also begun to say, hello and some women with heavy pockets responded to the foundations' call.
Colour wasn't anymore a thing for the lips and it didn't just have to be raging red. Colour could be orange, pink, blue, purple, green or gold and apart from the lips, it could be put on the eyes and on the cheeks too. Some have learned to be too generous with it, much to the dis-amazement of their onlookers.
Perhaps the one that has suffered most in the hair. They quickly dissed their Afro and straightening combs and opted for chemicals that could make the hair straight and soft. When there was no money to buy relaxers for disvirgining the hair, they opted for "coco soap",(a locally made soap bar) which could be bought with peanuts from Mami Pauline's store down the street. Coco Soap did a fine job of changing the texture of the hair just that it was a little more enthusiastic than the regular hair relaxer. Sometimes, Coco Soap even attempted to change the colour of the hair though it wasn't assigned that task.
And here we are, my aunties and I in 2016 where the pursuit for nyanga (make-up) is on the rise. We are seeking to get our eye brows on fleek, get the trendy foundation and apply the eye colours just right. We seek to get the hairstyles that are head turners and alluring lips.
Hmmm, is there an end to these trends??? We now have braids, wigs and human hair. Make-up artists teach us to put 1000 items on our face in order to achieve a "flawless look". With all these products, you have to look like a witch first before you look like a fine girl. You also need to spend many hours in front of your mirror each week to get it right. Who shall deliver us from the spirit of nyanga?
It is good to look and feel beautiful but while you are at it, don't let the other segments of your life suffer. Quit getting into debt just because you want that particular make-up item. Or getting hooked to that man because you want some cash for more Brazilian hair. Or buying various eye shadows in the market which you will never ever completely use. Or going late to that function (now I'm talking to me) just because you want to get your glam on. LET NYANGA BE DONE IN MODERATION.
Which make-up trends fascinate you most? Did you ever do the pencil on the wall thing or the chalk? Please talk to me down there!