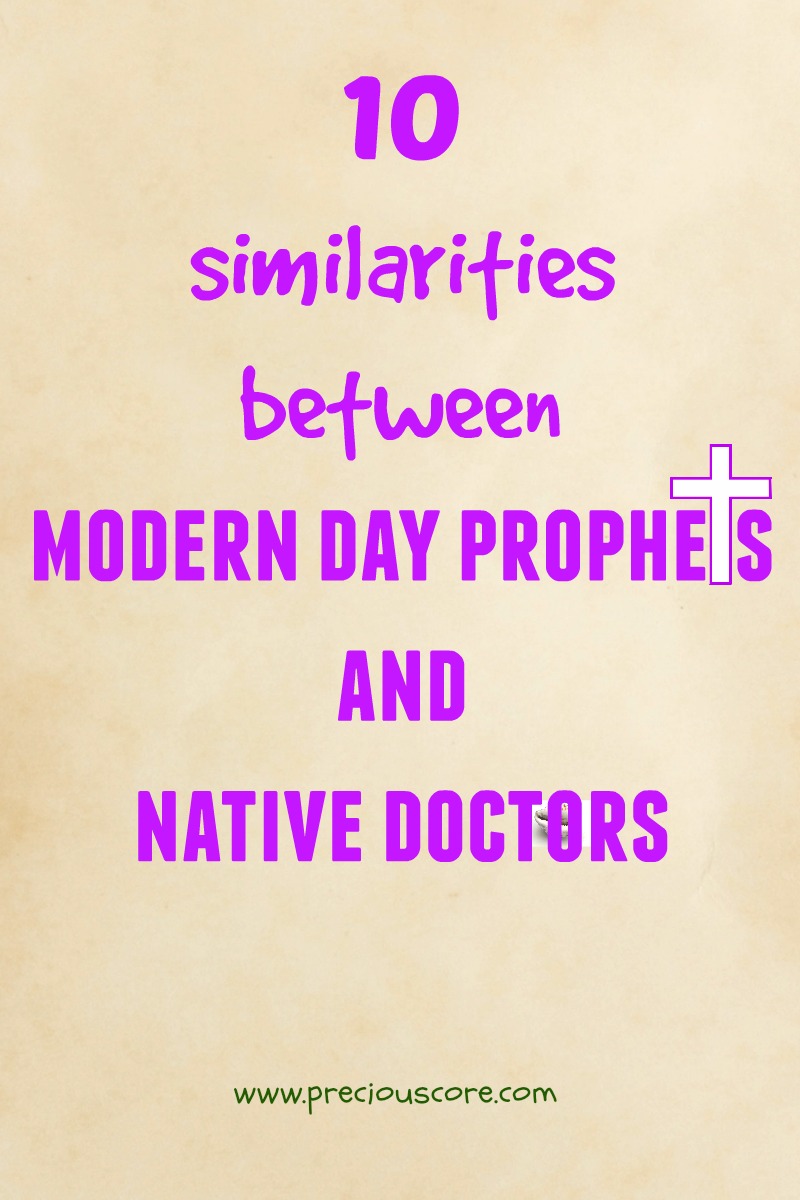 Once upon a time, my mother visited native doctors to search for solutions. In Africa, native doctors are men or women believed to have access into the supernatural world. She told us quite a few stories about her Ngambe (native doctor) house misadventures. Perhaps the one I remember most is the time when she was commanded not to talk to anyone on her way back from a Ngambe house.

Fortunately or unfortunately, my mother saw her cousin on her way back and she erroneously shouted, "Besong!" Then, mama suddenly remembered that she wasn't supposed to talk to anyone. Her talking to anyone before getting home was supposedly going to kill the powers of the medicine she had been given. She became temporally mute. Her confused cousin, Besong kept asking her, "Grande Soeur, na weti?" (Big sister, what's the matter?) She kept looking at him like someone who was had forgotten her name or who she was. She couldn't offer a word. I'm pretty sure uncle Besong was mortified so he had to follow her home. There she began talking again and the mystery was unraveled.

My mother has recounted this story to us, umpteen times. Each time, she does we laugh (and bond) over it. Thankfully, my mother stopped visiting native doctors a long time ago due to her relationship with God. Praaaaaaaaise the Lord, somborrri! She now goes to churches. What do you find in some of these churches though? Men, holding a Bibles, standing behind pulpits and doing the same things native doctors do. Only this time, they are doing it behind the cross and not with cowries. These men are common in our societies. A majority of them love to be addressed, "prophets".
I have seen quite a handful of these prophets. When I look at the way they operate, I see that they are very similar to the native doctors in my mother's stories. Here are the similarities:

If the prophet or prophetess starts praying seriously for you and lets you know that they are praying for you, beware. You are being fattened as a calf to be slaughtered. After the prayers and generous soothing prophetic words drawn from the spirit, will come a monetary request.
The modern day prophet asks for tithes, offering, "prophetic seeds" in exchange for blessings, miracles and "special anointing." He says the money is for God.
The native doctor asks for goats, hens, strong drinks, oil and money in exchange for protection, potions and guidance. He says the money is for the gods.
There is nothing wrong with giving to God and supporting the work of a church. But if your prophet keeps pressurising you to give and you don't feel happy about your giving then maybe it is time to put on some walking shoes and become Johnny Walker.

Each one must give as he has decided in his heart, not reluctantly or under compulsion, for God loves a cheerful giver. 2 Corinthians 9:7

2. They keep telling you of your enemies

To the native doctor, your joblessness was caused by that uncle in the village who doesn't want you to prosper.
To the prophet, your predicament has been by caused a family member on your mother's side whom he sees in the spirit. I have seen a prophet mention this in real life. No jokes.
It doesn't matter if your problems were caused by things that don't involve a person bewitching you. They always steer your mind towards direction of
"your enemies." All those who do not want you to progress, die by fire!

The native doctor launches an attack against your supposed enemy. Sometimes it is sending thunder or at extremes, making them mad or taking their lives.
The prophet commands your enemies to "die by fire" because scripture says you should, "suffer not a witch to live"
How about this:
"But I say, love your enemies! Pray for those who persecute you! Matthew 5: 44
"Dear friends, never take revenge. Leave that to the righteous anger of God. For the Scriptures say, "I will take revenge; I will pay them back," says the LORD." Romans 12: 19

4. They provide potions for you to take home

The native doctor provides potions, rubs and charms for you to take home in exchange for a fee.
The prophet provides anointing oil, holy water and anointed handkerchiefs for you to take home supposedly "for free". But that's what you paid your prophetic offering for! Some outrightly package and sell these things. I am yet to see a Biblical scripture that supports this.

5. You have to depend on them!

You keep going back to the native doctor because if it is not your waist today, it is your tummy tomorrow. When it is not your tummy, it is your head. There is always something going on in life that needs their special touch. They give with one hand and take with another. Business has to go on.
Same with the prophet. You have to be close to him to hear what the Lord is saying. You have to inform him before making major decisions like travelling, marriage or even what clothes to wear. He is in charge of your life.

6. They can access the supernatural in the way that you can't

The native doctor has the special key to the supernatural. He goes in there, sees things about your life and broadcasts them to you.

The prophet has this special key too. He is like your eyes in the spirit. He goes in there and brings you information because people always want to hear something about themselves they do not know.

For God hath not given us the spirit of fear; but of power, and of love, and of a sound mind. 2 Timothy 1: 7

8. They use a combination of tricks, lies and powers

People always want someone who will tell them all is well. These prophets and native doctors do a fine job at that!

10. They are focused on themselves

While a true prophet of God focuses on God, these native doctors and prophets focus on themselves. They are mostly driven by the love for money, which is the root of all evil.

Those are the similarities I have noticed, my friends. A lot of people in our society have either visited native doctors or know someone who has. That's why we have a lot of glorified native doctors masquerading as prophets today. There is a ready market for them. Are there true prophets of God? Yes, there are!

God himself called some people to be prophets. These prophets given by God are true gifts to their generation. We see a great number of them in the Old Testament like Elijah, Elisha, Nathan, Ezekiel, Jeremiah. When I think of these prophets, I think of men who served God against the odds. I think of men who were ready to let go of themselves and let Christ reign. Just like the prophet John the Baptist said, "He must increase, but I must decrease."

Those are the kind of prophets God gives. Those who consciously decrease and let God increase. Those who eat locust and wild honey in bushes because they are on a mission. Prophets after God's heart. Prophets who do not sell prayers because, "freely have you received, freely give."

Above all, seek to know God for yourself and study your Bible. Stop depending on other men for hope, answers and solution. You can access God yourself right where you are. Don't be a consumer Christian.

Thanks for the native doctor stories, mommy!

Have you had an encounter with a modern-day prophet? Please share below.

« 7 REASONS WE DECIDED TO HOMESCHOOL
HERE'S WHAT'S UP: OUR WEDDING ANNIVERSARY »