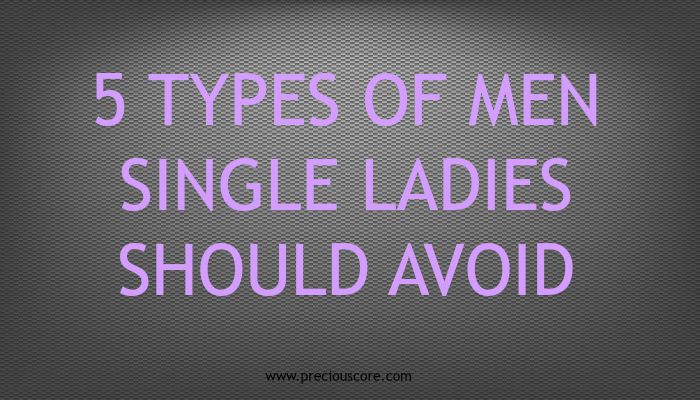 This post is for single ladies who are in the dating game and hoping to get married. You believe you are now mature and you are ready to settle with the right man. You hope to get the man that you will share your life with. Just like there are many goods in a shopping mall, in the husband market, there are various kinds of men. Here are some species of men you should avoid:
1. THE MANIPULATIVE MAN
He tells you he loves you so much. He tells you he can not live without you. He makes you smile and your heart leaps for joy at his sight. BUT he keeps demanding pre-marital sex from you. When you refuse to give in, he says all sort of things to make you feel bad. He makes you feel you are doing something wrong by not succumbing to sex. He wants you to know you will be validated as his potential wife if you open your legs. Flee sister, flee.
2. THE MOMMY'S BOY
He has a strong bond with his Mom which you like. However that bond trespasses wrongly into your relationship. He will rather do what Mama says regardless of whether it is right or wrong. His attitude is beyond a man honouring his mother as the Bible stipulates. He is remote-controlled by his Mummy. If you marry him, you will be getting in as a second wife. Mummy is already well placed as wife number 1. Flee sister, flee.
3. THE SAFE PLAYER
Your relationship kind of began 'naturally'. He didn't ask you out. He didn't say he loved you. You got acquainted and you felt a spark in your heart. You felt like he was 'the one'. He has been acting like he loves you. He just hasn't said it. Months have gone by- maybe even years. You keep waiting for when he will make it official. He sometimes introduces you as a friend- nothing more. You keep expecting but your expectations are not being met. You are shunning suitors because of him but he is saying nothing. Sister, you are in a relationship with the idea of being in a relationship, not with a real man. Soon, you may be hit by his wedding invitation and you will feel betrayed. Flee, sister, flee.
4. THE PERCHER
You have a good job. You are living a comfortable life. You meet this prince charming. He is still struggling to find his feet. It looks like he is into you. You two begin a relationship. You are happy because you know he is a guy with 'prospects'. You support him financially because you know he is on a path of growth. After a while, he gets too comfortable because of the support he is getting from you. His enthusiasm to find a stable income has dropped drastically. He is ready to wash your clothes and lick your feet as long as you give him some $. He is in a hurry to marry you. He wants you to 'lend' him some money to finance the wedding. He is not into you, sister. He is into your cash. He is a lazy man. Flee sister, flee.
5.THE OPPORTUNIST
You are one girl that turns heads whenever you pass by. You are attractive to both Christian men and unchristian men. This guy approaches you. He wants to marry you. You tell him your husband must be born-again and since he is not, there is no future for you two. After a while, you see him in your church. He appears serious. He even joins a group and starts serving in church. He comes to you with his proposal again. He says he is now born-again. You are not sure he has a personal relationship with the Lord but he seems like a good man and you want to settle down with him. Good is never a replacement for being born-again and his true colours will show as soon as you marry him. Flee sister, sister.
You are better off single than being with the wrong man. Why settle for less when you can have the best? There is nothing better than falling in love with a man who is deep in love with Jesus.
If you know other kinds of men that should be avoided, please let me know in the comments section below. Have a stress-free weekend!

« ONE DAY, MANY FUNCTIONS
AND THEY LIVED HAPPILY EVER AFTER »