When Mr N asked me to marry him, I did not foresee how short our courtship would be. We are not one of those couples who dated for ten years before marriage. From that day in February when I said yes, it took only three months before we had our traditional wedding in May. Worthy of note is the fact that our engagement wasn't typical of engagements today. There was no dramatic kneeling down and saying, "will you marry me?" I accepted to marry him via a text message. There was also no engagement ring. I chose to get one for myself and put on my ring finger so other men would know I'm taken. True story.

You see, Mr. N is not that kind of guy to follow the route of planning a wedding proposal where he will "pop the question", you know, like it is in the Western world and on social media these days. The reason he came close to me in the first place was because he wanted to marry me. And the reason I had anything to do with him was because I wanted to marry him too. There was no need pretending that we were just dating until the big day when he would "officially propose."

With the pressure around these days, I almost felt like we were missing something. Well, I did feel like we were missing something! And sometimes, I feel like it should have been the way A or Y's own was. Or I feel like my wedding gown would have been more stylish (especially as mine was made by Pa Emmanu the tailor - totally true story.) Our wedding was not one that would get a spot on Bella Naija's Weddings column. It was somehow basic.

I have grown to understand that you have to understand and appreciate your path. You have to cut your wedding coat according to your size. Life puts a lot of pressure on us. There has to be a proposal, an engagement party, a bridal shower, a pre-wedding photo shoot, then the big wedding which would be the talk of the town. And it is so easy to focus on the cosmetic appearance of a wedding that you forget to actually prepare to get married.

So we barely had any of those partly because I am a "contri geh" (see why) and partly because those things don't come naturally to our culture. We skipped the proposal, engagement party, bridal shower and the modern day wedding shenanigans, and went straight to the traditional wedding. The traditional wedding happened three months after I accepted to marry the brother and I was only 21 going on 22 then.

Also, it took only three months from May to August when we had our wedding. So in reality, we courted for 6 months. It was a very short one characterised by lots of calls, text messages, travelling far and wide to see family members, holding hands and you know, planning a wedding. Read on if you are interested in knowing the itty-bitty details of our courtship story. 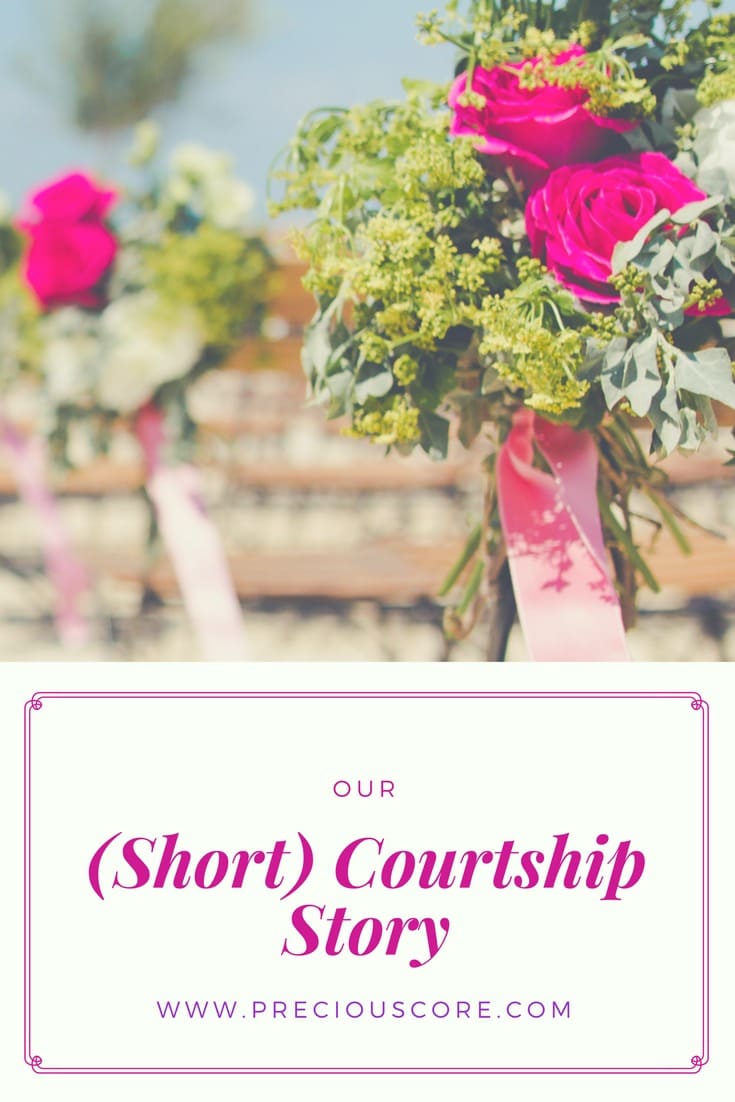 Prior to being in a relationship with Mr. N, I loved listening to Christian tapes and reading Christian books on marriage. It was one of my favourite things to do. Of the many books and messages I gleaned on was one by late Pastor Bimbo Odukoya. One of the things she often stressed on was that a courtship should not be too short. She said you needed time to know the other person. And she made sense.

In fact, most of the marriage ministers I listened to recommended an average of two years for a healthy courtship. My courtship didn't follow this guide at all. According to Mr. N, we didn't even have a courtship. Because it took only a few months from when he first met my parents till when we were married. But we didn't just know each other in those few months. We knew each other for 4 years before getting married though we were not dating in those four years.

So our courtship was very unconventional. It's not like we were in a hurry to get married. But Mr., N started discussing traditional marriage plans with my dad literally the first few times he met him. Then my dad called his people AKA his kinsmen and they set the ball rolling. Everything was so surreal as we were traditionally married in only a few short months. I should also state here that this happened so fast because Mr. N had the means to finance everything. If he wasn't financially able, we would have waited for more months or even years so we could prepare financially.

We tried to maximise our time as much as we could during our short courtship.

We talked a lot - about the number of kids we would love to have, where we would live after marriage and much more.

We went out a lot- we went to the restaurant where Mr. N first asked me out. That place holds good memories for us.

We visited lots of family members - Mr. N visited my family over and over again and got acquainted with them. I got to meet his mom, his brothers, their wives and other family members.

We held hands - like a lot. Mr. N could not let go of my hands. Haha so much love. I was so scared as a conservative "church geh" that it was going to deteriorate into something else. But he assured me that pre-marital sex was not going to happen as it would only destroy us.

We also held many conversations with our pastor and planned for our wedding which eventually happened.

That's basically how our courtship went before we started life as Mr. and Mrs. If there's one thing I 'll want you to take away from here, it is that you should cut your wedding coat according to your size. Once you find the right person and you are planning a wedding, don't let the pressures of society get to you. You must not hire that professional make-up artist simply because Sophie did. If you can afford it, fine. But do not go borrowing for a lavish wedding because society says your wedding must have a certain feel to it. Be content with who you are and what you have.

Finally, put God at the centre of everything. Having God in my life is the most important thing that keeps me going. And I'm grateful to have had Him right from the start of our relationship till now.

I hope this story inspired your journey in some way. We've been married for over 7 years now and it only gets better!