You know what they say. You get married. Then the love between husband and wife dwindles as the years go by. This love dwindles so much that your lukewarm marriage becomes the new normal. You argue. You make up. Life continues casually, you know.

But it's no longer there. The deep overwhelming love that drew you two together at first. You are no longer eager to spend time with your partner. You do not get butterflies in your belly when they are around. "I love you" is now some distant phraseology. Life continues like that.

Because a lot of people have been there, done that. These people are your mentors. They look at couples who happen to still be in deep love with each other and they exclaim aloud almost sarcastically, "Is the marriage new?" Ha.

Because you know, a marriage with hot love is only supposed to be a new marriage in their books. The love is supposed to get cooler and cooler then gets lukewarm at its best.

Lukewarmness didn't take anyone anywhere. The winners in this world are not lukewarm people but those who fight consistently hard at what they do. Those who have a "winning prayer life" are those who pray fervently. Not those who pray today then don't pray tomorrow. Not those who keep prayer only as a spare wheel at the back of their car. Same with medicine. Show me a lukewarm medical student and I will show you someone who may never graduate from medical school. You do not graduate by casually reading your books then hoping that by some stroke of luck you will pass. You graduate by studying hard, pressing on and passing your exams because of the hard work you put in. Why I'm I giving these examples? To tell you that nothing good comes through lukewarmness.

Therefore, a marriage that is not worked on consistently and fervently becomes lukewarm. And I do not want that kind of marriage. 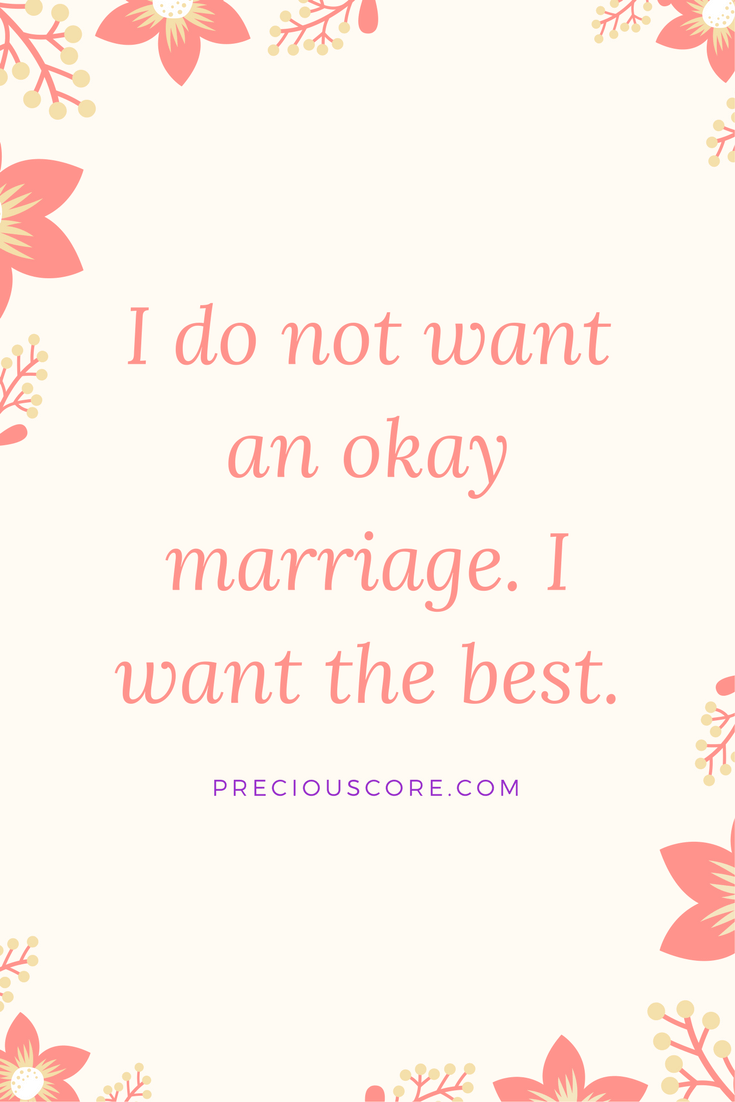 Because when God made this thing called marriage, He made a good thing, not a bag of woes. He created a relationship that models His relationship with us, the church. There is nothing in this whole wide world that can compare to a man and woman together in holy matrimony fulfilling God's plans for their lives. Together, they can move mountains. Together, they are a powerhouse.

So I am not settling for an okay marriage. I am settling for the best. What does the best look like? The best means constantly working hard to improve on my marriage. It means taking care of my marriage according to the word of God, not according to worldly standards. It means texting my husband when he is at work just to let him know how much I love Him. It means praying for my marriage like everything depends on prayer. It means having movie nights together. It means going on a date away from the kids, just us. It means loving passionately and being determined to overcome every hurdle by the grace of God. It means not tolerating any habit that breaks my marriage.

To marriages that last!