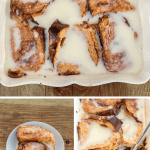 This is the most phenomenal Challah Bread Pudding. My family chowed it down minutes after I made it. DO NOT skip the bread pudding sauce.

According to my husband, Mr. N., if a girl wants to get married, she should make this Challah Bread Pudding for the man she wants to marry. Do I need to say more? I think not!

What is Challah Bread?

Challah Bread, pronounced "hallah" is a traditional spiced braided Jewish bread that is made for special occasions. Challah bread contains a lot of eggs so it is incredibly rich.

What is Bread Pudding?

Bread Pudding is a dessert that is made by soaking bread in eggs, milk, sugar and sometimes spices then baking the mixture to form what is known as bread pudding. It is mostly served with a buttery sauce.

Making bread pudding is a great way to use up stale bread because stale bread soaks up the egg-milk mixture better than fresh bread.

Bread Pudding can be either baked in a large bowl then cut and served or baked in ramekins for smaller or individual servings.

Apart from being a dessert, bread pudding is great for breakfast! It is also great to make ahead. Soak the bread in the egg-milk mixture and place it in the fridge overnight then simply put in the oven to bake the next morning.

Bread Pudding tastes like french toast. It is slightly crispy around the edges and dense on the inside. It is so good!

How to Make Challah Bread Pudding

First, arrange slices of Challah Bread on a baking pan. You can cut the slices into 1-inch cubes if you prefer. I make it that way sometimes but I was feeling extra while shooting this recipe so I left my slices big.

Thirdly, pour the egg mixture all over the bread. It will look like a lot of liquid but don't worry, the bread will absorb all of that goodness.

Now let the bread sit in the mixture for about 5 minutes so it can absorb all of that goodness. While the bread rests, preheat your oven to 375 degrees Fahrenheit (190 degrees Celsius).

Place the bowl into the oven and bake until it is puffy, golden on top and a toothpick inserted in the middle of the bread comes out clean or just a little sticky.

Now here is what you need to know: your bread pudding will come out looking all puffy. BUT it will gradually sink. Do not worry, this is normal.

Once your bread pudding is out, pour Bread Pudding Sauce all over it.

Can we talk? Here is one of those posts where I get all bossy and order you to make it! This Challah Bread Pudding is a MUST MAKE.

If you do not have Challah bread, substitute with another bread and make some. It is rich, comforting and just brings the family together in a good way.

Also, this bread pudding is great for entertaining. Let it bake away while your guests savor the main dish. Then whip it out for dessert like the rock star that you are.

You could make the sauce beforehand and simply warm it up and pour over the bread pudding before serving. A scoop of ice cream on each serving won't hurt either. I am just saying!

This bread pudding is as hearty as Malva Pudding. So if you love desserts like this, also check out Malva Pudding recipe.

If you make this recipe, don't forget to rate it below. I love hearing from you guys! 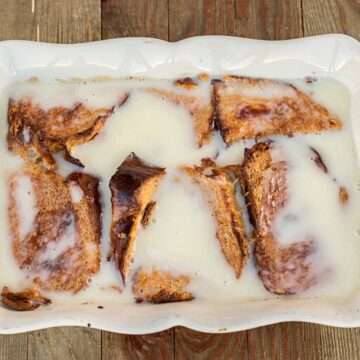